It’s time to get down to the task of covering some serious mileage. We pull out a rather good audio book we’ve been listening to set in 18th-century Scotland (read with some beautiful Scottish accents!), while Nettle stoically devours mile after mile. We spend quite a while following the wooded edge of a big picturesque loch north of Glasgow, before the road becomes motorway and the scenic part of our roadtrip comes to an end.

We spend the night propped in a wide lay-by beside a little road well off the motorway, overlooking miles of gentle rolling green hills, covered in bright green new bracken. Yep, we’re back in England again. 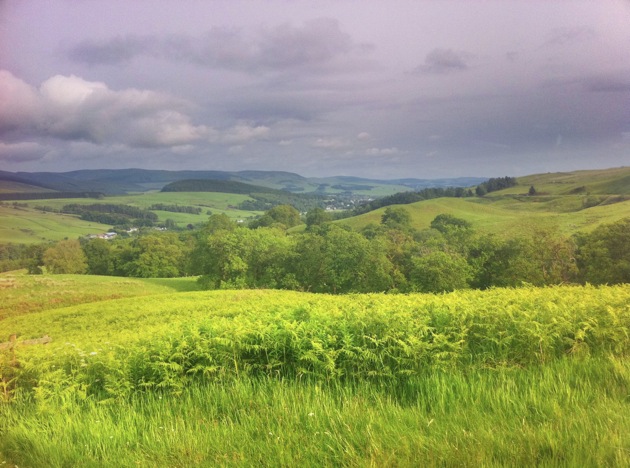 Another day of motorway, and we stay in a little car park beside a playground at the edge of a housing estate.

Finally, we pass into Wales with its dual-language road signage, and eventually roll into the unapologetic suburbia of Swansea. We stop at a huge Tesco supermarket, where we are delighted to find a section with big bags of spices, instead of the pathetic tiny jars, and we stock up on cumin, coriander, turmeric and a few other bits and pieces. Most importantly of all, we grab all the Vegemite we can get our hands on. Then we feel a little embarrassed, and re-stock the shelf slightly. 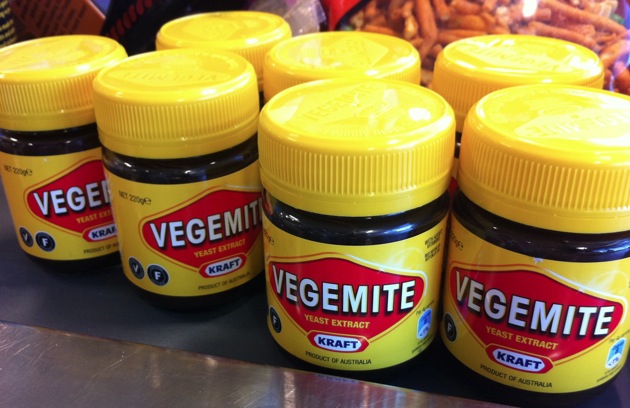 Finally, wearily, we pull into the farm CL we’d found on the outskirts of the city.

We spend a relaxed day at the CL, then drive in to the hospital for Katherine’s appointment. I park in one of the beach car parks and do some work on Loopy.

Mike waits in Nettle while I go to my appointment. There is absolutely no signage to the Breast Clinic. After following signs to various other lady-oriented services, such as Maternity & Child Health, and Gynaecology I still have no joy. I duck in to ask for directions and find myself watching the clock whilst the person in front of me seems to take an eternity. Finally I get some directions.

After following the directions for a while I still don’t see the Breast Clinic. I work up a sweat (it’s a hot day!) running up and down a couple of flights of stairs in what looked like a promising building but isn’t. By the time I find the Breast Clinic it’s just a couple of minutes until my appointment and I’m hoping they don’t have to examine my underarms.

Shortly I’m bustled off and directed to put on a smock. After another short wait I’m in a room with two nurses and the consultant. After a physical examination and a scan he’s convinced it’s just a cyst but procedure dictates they need to do a biopsy. Yet another guy joins our little congregation and pokes me with what sounds like an industrial staple gun a few times. I suspect my youth has triggered the nurses’ maternal instincts as they are positively doting over me. It’s very sweet. Now to await the results!

Phew. Sorted. So, once Katherine returns with a big smile, and we rejoice in it’s-just-a-cyst-ness, it’s back on the road we go. We drive the very familiar route to our home of just a few short months ago: Lygos Farm.

We drive up the driveway, feeling like we’d never left, and marvel at the green profusion the place had become. We’d both thought of Lygos as being relatively arid, compared to the lusher parts of the UK, but here it was, thick with new green growth, the hillsides bright green with the young bracken. 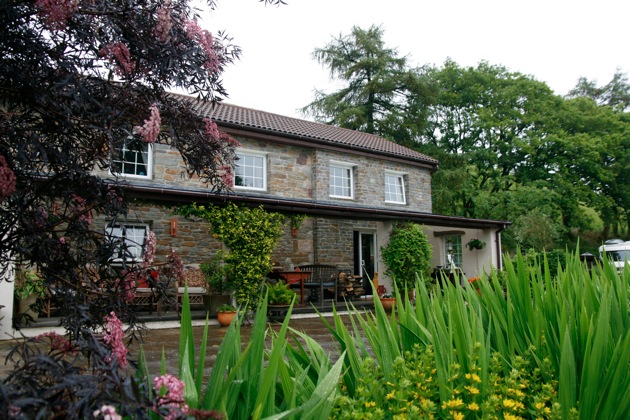 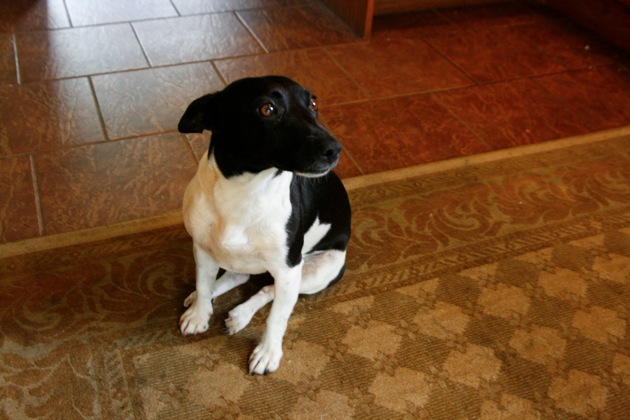 We’re met by Mike and a hysterically excited Jack Russell — perhaps Zoe remembers us? — and Mike and Anne greet us warmly. We have a great time catching up with them, talking about their plans to find a smaller cottage to live in half the year and spend the other half travelling, and talking about our travels, apps and plans. Zoe and Sooty, their dog and cat we fostered over winter, are still their normal quirky selves — although apparently Sooty is walking into more things, lately, the poor klutz.

Mike takes us on a wander around the garden, transformed with spring growth; the area around the pond is alive with tiny frogs, many still with tadpole tails. 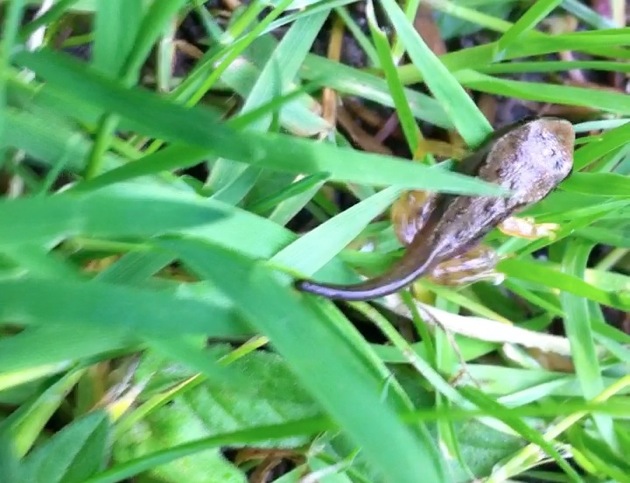 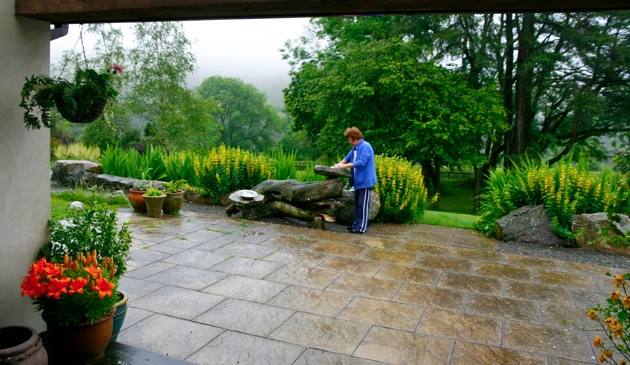 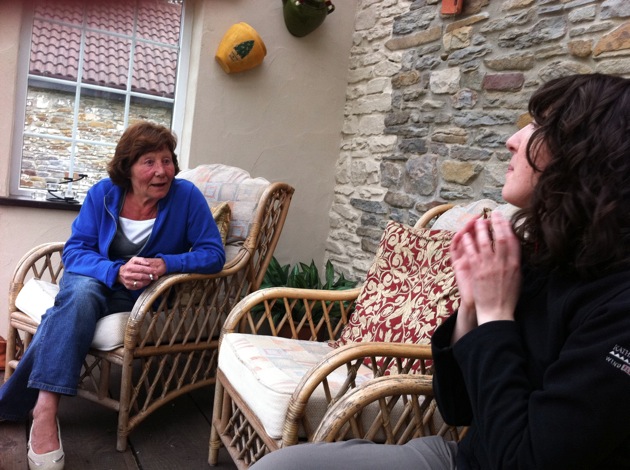 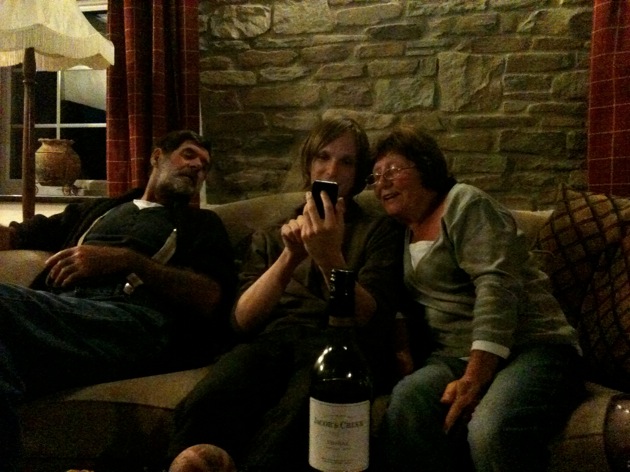 Contrary to appearances, I can interact without an iDevice in hand. Just not right now.

They tell us stories of their time spent living in Glasgow in the late 60’s/early 70’s. The common sight of men with scars on their faces from being attacked with broken bottles; bars with darts, dominoes and cards banned due to quick tempers and easy violence — even standing at the bar wasn’t allowed, for the same reason; the habit of keeping sharpened pennies on hand to insert between one’s fingers for DIY knuckle-dusters. They tell us about the tenement flats they lived in, where one of the apartments was stripped by a departing tenant who stole everything, from the fittings and the sink, right down to the carpet. And they tell us about the time they went to see a late-night film, and coming out, witnessed a man crossing the road who was deliberately run down by a car, in front of them; when they ran to assist, another man, presumably an accomplice, told them to move on and not to interfere.

While we’re visiting, Anne and Mike receive a call from their real-estate agent and apparently, just like that, they have a buyer set up and ready to go! So, it seems like their plans are well under way!

We really enjoyed catching up with Anne and Mike again — they’re just the most lovely people.

Time always has a habit of sneaking up on us. Somehow, we’re almost out of time here in the UK: … Continue reading

Way back when we were in Cornwall in August last year, I discovered a lump in my breast and pretty … Continue reading

We have a very sociable few days coming up. First, we’re meeting up with some quasi-distant relatives of Mike’s and … Continue reading