Detained, But Not Deported: The Long Road to England Part 2 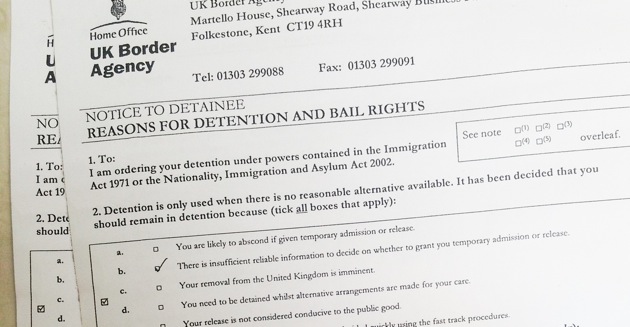 We’re stuck in a very ill Nettle right outside the border control booths of the ferry port. It’s not quite the worst-case scenario we’d envisioned for this crossing, but… Well, it’s bad enough.

I confirm the diagnosis by peeking at Nettle’s innards, and find myself at the frontier police office seeking assistance. In a way, it’s probably the best place this could have happened. All I need to do is explain the problem, and people jump into action, calling up a tow truck for us and all.

I’m expecting a truck to come to take us away to a mechanic in Calais, but a truck turns up soon after and tells us he’s going to take us right onto the ferry and, presumably, off again once we hit UK soil.

He tows us up to the UK border control booth, and I thrust my carefully compiled stack of supporting documentation at the poor guy behind the glass. He takes one look, and points me over to the border control office on the other side of the entranceway.

An attendant at the door greets us, asks a couple of questions (the responses to which I’ve prepared, and present the various pieces of paper as necessary). Then she tells us okay — they’ll need to ask a few more questions, if we could stick around.

Sounds okay; we grab a couple of seats in the lobby of the border control office. The minutes tick by. Twenty minutes to the ferry stops taking boarders. Fifteen. Ten…

Someone else comes out and our stomachs drop down though our seats when she hands us some very official-looking, very terrifying pieces of paper:

NOTICE TO DETAINEE: REASONS FOR DETENTION AND BAIL RIGHTS.

DETENTION? Holy shit, what have we gotten ourselves into?

The form has tick-boxes for the various reasons we are being held. There’s a tick beside “There is insufficient reliable information to decide on whether to grant you temporary admission or release” and “You have failed to give satisfactory or reliable answers to an Immigration Officer’s enquiries“. Bloody hell — well, at least it’s not “Your release is not considered conducive to the public good“, “Your unacceptable character, conduct or associations“, or, god forbid, “You are excluded from the UK at the personal direction of the Secretary of State“.

I’m trying to maintain a pleasant expression as disaster scenario after disaster scenario flash though my mind. Are we going to be just denied access to the UK? Are they going to send us back to Australia?? What will we do about Nettle?

Thirty minutes until the ferry departs. Fifteen. Ten. Five. It’s gone, and we’re still sitting on these uncomfortable plastic seats. The tow truck driver decides that’s that, then, and we watch through the window as he unhooks Nettle and drives off to other errands.

We’re sitting there for at least an hour, wondering what’s going to happen to us. Then a woman comes over — “Mr. Tyson, come with me please.” Is this where the waterboarding happens?

She leads me into an interrogation room, just like you see on TV. Cramped, dark, two seats opposite each other, a table and a conference-room phone. She pulls out a pen and an interrogation form, and starts writing: 1. What is your name? 2. Date of birth? 3. Nationality?. Okay so far.

She indicates the stack of printouts of my financials, showing the last six months’ activity. “There’s some pretty large amounts going in and out, here.” That one’s easy, too – I explain how my business works, and she seems happy with it.

I walk her though our travel history since we arrived from Australia. She observes that we’ve already had a 2-year UK visa. “Why are you coming back to the UK?” — because, you know, you should be able to visit each square centimetre of the UK at least twice in that time. I’d heard of this being asked before, and was ready: We’ve some friends we want to visit, plus there’s more we’d like to see.

A few more questions, none of them particularly difficult — and my interrogator says she’s heard enough, and will go and stamp our passports.

I give Katherine the thumbs-up through the window — in the meantime a second tow-truck has arrived and Katherine’s talking to the driver. A few minutes later, stamped passports in hand and enormous relief in our hearts, we’re watching Nettle being winched up onto the back of the truck — a disconcerting sight. 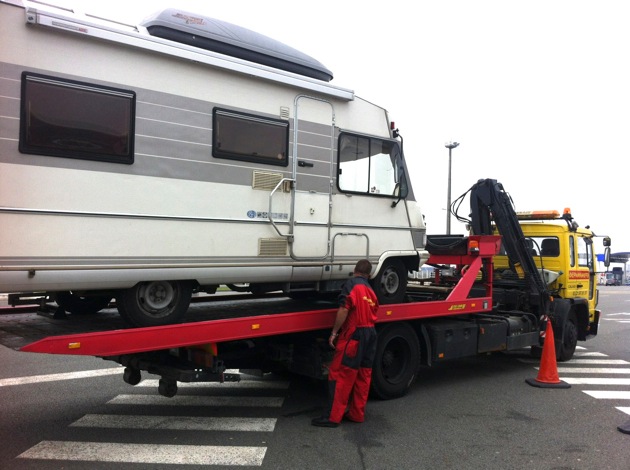 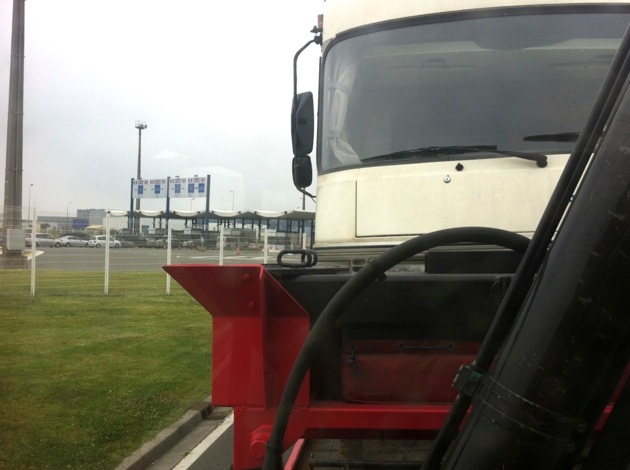 We jump in beside the driver, feeling elated now, and he drives us and Nettle to the garage a few blocks over, and tells us to return at 2, when the garage opens after lunch. We have lunch at a nearby hotel restaurant, wait half an hour or so in the garage’s office, then Nettle’s driven out to us, good as new!

Second pass through border control goes absurdly more smoothly than the first, then we have to buy new ferry tickets, and we board the ferry at last. 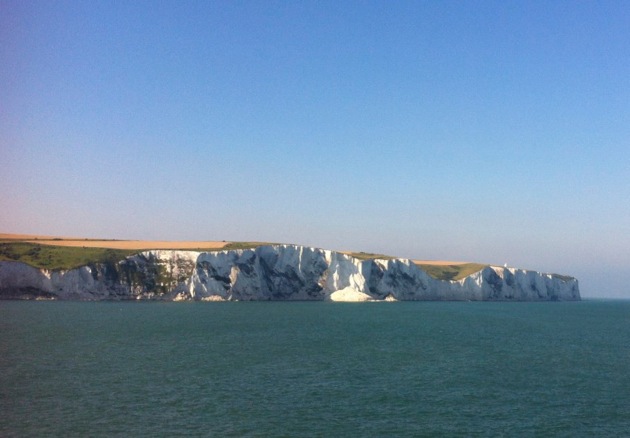 Sphincters tighten as we pass by the “CUSTOMS” sign (Nettle’s MOT certificate is now rather expired, and we’ve heard they have number plate recognition cameras that’ll inform the staff of that fact), but it’s totally unmanned, and we suddenly find ourselves leaving the ferry port. Just in time, Katherine reminds me we’re driving on the left side of the road.

One could probably have heard the whooping from Italy.

We stop in at Tesco, to pick up some long-missed items: Bagels, cheddar, baked beans and whatnot, then drive to our favourite CL site in the sleepy village-ette of Wootton. 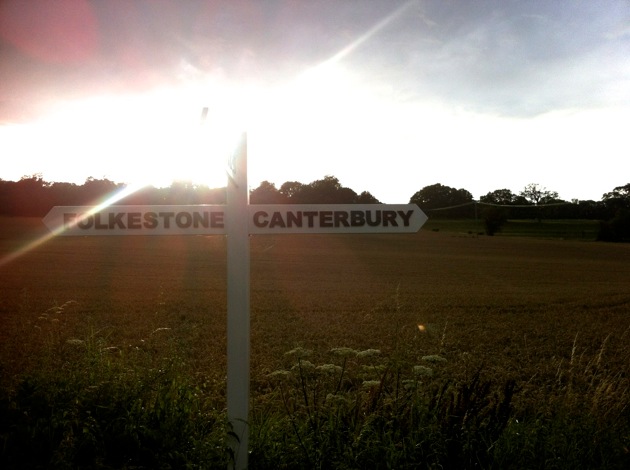 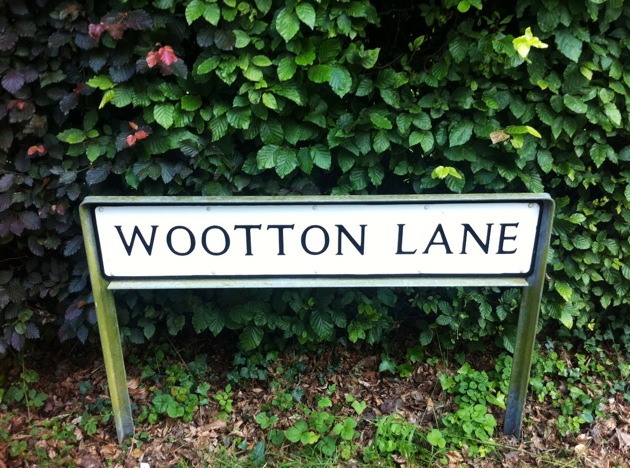 The Long Road to England: Part 1

After much daydreaming about fish and chips, bagels, ubiquitous 3G internet and speaking English again, the time has arrived to … Continue reading

It’s been two years from the start of this adventure, and our UK visa is about to expire. We’re not … Continue reading

This entry was posted in England, France and tagged Driving, Ferry, Immigration, Motorhome Mishaps. Bookmark the permalink.
next
prev

4 Responses to Detained, But Not Deported: The Long Road to England Part 2