Hanging From Our Fingernails: Tackling Striding Edge and Helvellyn

Here’s what the Lonely Planet has to say about the hike up to the peak of Helvellyn:

…the ridge narrows to about 2m in width and you’re on the jagged teeth of Striding Edge, with precipitous slopes on either side. You’ll need to use your hands in places and less experienced walkers may feel decidedly vulnerable.

Our actual experience of the climb had us laughing incredulously at this rather tame description, although only after we’d spent two hours rock climbing with a decidedly definite fall to our deaths to look forward to should we slip!

We start the walk in the little village of Glenridding, nestled amongst the mountains beside the picturesque Ullswater, its mirror-like surface reflecting the towering mountains beside it. We climb several hundred haphazard stone steps, legs protesting, as the view of the village behind us and the numerous surrounding peaks becomes ever more magnificent. We top a rise, and follow a beautifully constructed drystone wall that strides along the ridge, sheltering us from the wind that sweeps up the valley beyond. 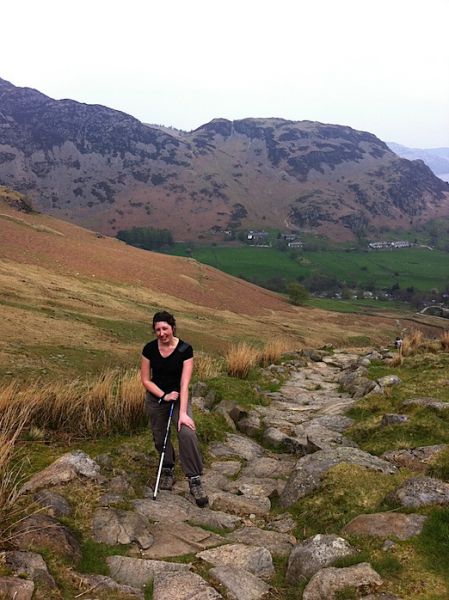 Red Tarn, a pretty little lake nestling in the embrace of Helvellyn’s rocky ridges, comes into view and the ground gradually falls away to the right, becoming a steep slope of shale. We pause to watch as beams of sunlight streaming though gaps in the clouds illuminate the surrounding hillsides and pass over us, temporarily lighting up the landscape in brilliant saturated colours, standing out against the dull grey of the sky, and the shadowy mountains beyond. 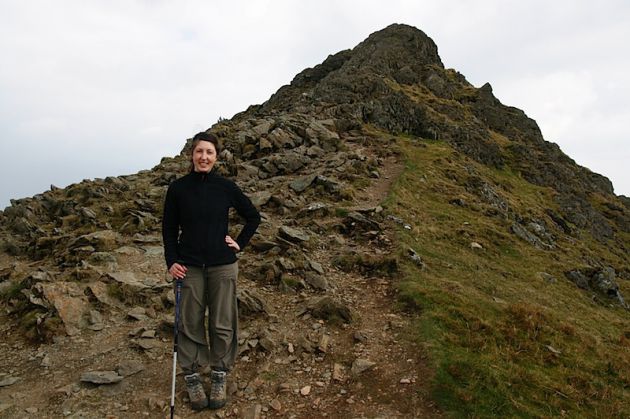 We pass by what seems to be a young climbing group, idling while a representative scouts ahead, and step onto the ridge of Striding Edge. The path narrows until there’s a rocky wall on one side, and a precipitous slope on the other, plunging to the lake below. Then the path disappears entirely, replaced by several choices of route over the rocks ahead. I climb up a rocky slope, and catch my breath at the sight down the other side of the ridge, plummeting several hundred meters down. My eyes follow the slope down, and up again to the steep slopes of the surrounding mountains, beautiful, rocky, austere, oh-god-grab-onto-something. I stop to take a picture while Katherine manfully ascends behind me, and we confer briefly about our next steps.

We decide on a route, and set out, clambering around rocky outcrops as the drop below us grows ever more vertiginous. We find ourselves staring down a four meter descent down a rock, and double back, choosing an alternate route scrambling down facing the other side of the ridge. Our jaws drop as we pass a couple going the other way with a six year old, albeit looking decidedly flustered. Meanwhile, the group of youngsters we passed are coming along behind us, dauntlessly tackling the descent we vetoed. 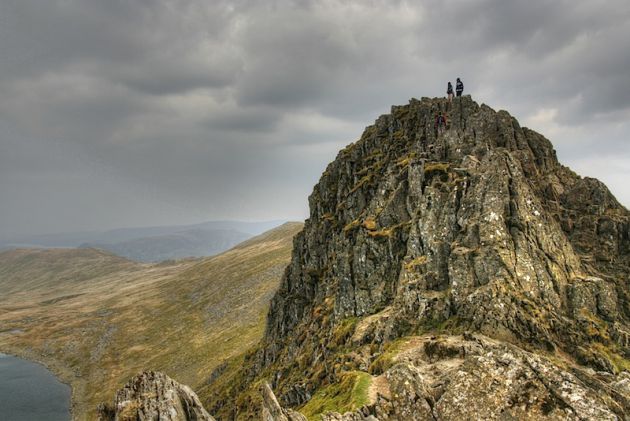 Katherine is giving me an incredulous look as I tell her actually, now I think about it, I don’t think it was our friend Daniel who recommended the route after all, but the adventuresome duo Tara and Tyler, some other friends who are decidedly more intrepid than either of us. She remarks that she totally would’ve vetoed the walk on the grounds of Lonely Planet’s alarming description, but was reassured that Daniel had said it was easy. Oops…She jokingly curses me as we press on (okay… half-jokingly!).

Amusing side-note: A couple of days later, we are chatting over Skype with Tara and Tyler, proudly recounting our Striding Edge experience, and discover with some hilarity that they’d actually mistaken Striding Edge for an earlier part of the hike — they’d actually had to turn back before reaching the ridge! 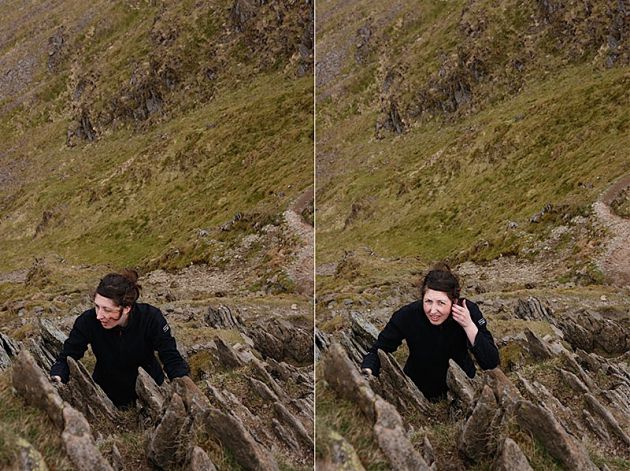 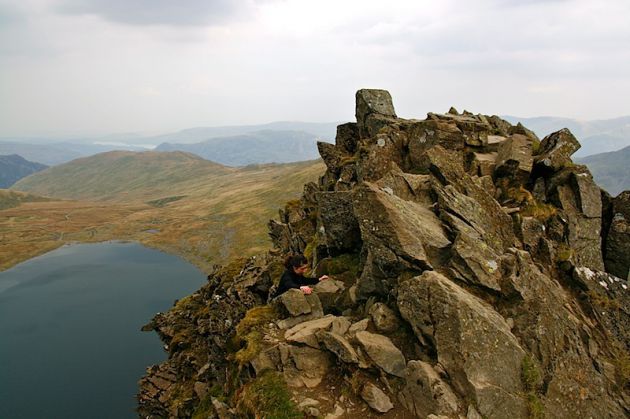 Another half hour or so of climbing finds us scrambling off the last of the rocks, and up a mossy slope onto the summit, alongside another couple of hikers who had chosen a similar route; we share expressions of relief as we straighten up and survey the ridge we’d traversed. 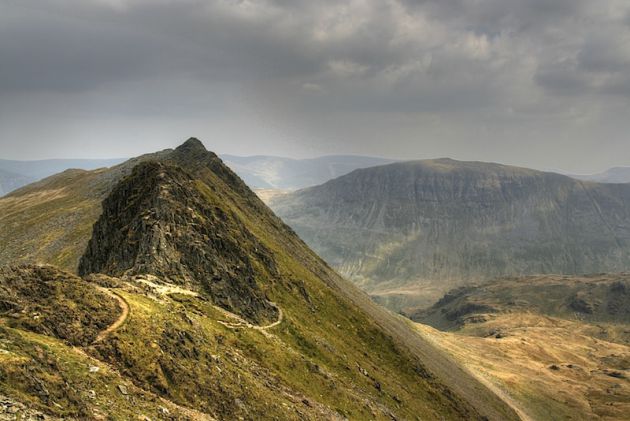 Beneath this spot were found in 1805 the remains of Charles Gough, killed by a fall from the rocks. His dog was still guarding the skeleton. Walter Scott describes the event in the poem “I Climbed the Dark Brow of the Mighty Helvellyn”. Wordsworth records it in his lines on fidelity, which conclude as follows:

The dog, which was still hovering nigh,
Repeating the same timid cry,
This dog had been through three months’ s pace,
A dweller in that savage place.

How nourished here though such long time,
He knows who gave that love sublime,
And gave that strength of feeling great,
Above all human estimate

Anyway, having tackled Mighty Helvellyn’s brow, we settle down to a couple of sandwiches, watching the cloud shadows roll over the mountains. We’re baffled to hear the complaints of a young toddler, incredulous that they managed the climb with a toddler in tow (or are we really that soft?). Mystified, we press on,

The mystery is cleared up when the couple with the toddler head on along an alternate path going the opposite way, as we peer down our route, another precipitous ridge heading down the other side. Actually, I peer down the ridge — at this point, Katherine has confidently headed off after the couple with the toddler, presumably having decided that that’s quite enough trying to fall off of high things for one day, and that the alternate path scouting around some mountains beyond was the route to take. Actually, she’s not realised that our route is actually a path, and in her defence, it certainly doesn’t look like one! It’s a steep descent, requiring some more climbing down the rocky ridge before the path becomes visible further down the mountain. We briefly consider the alternate route, but realise it’s probably longer than we have time for, so we set out down the slope.

This time, it’s a piece of cake, and we make good time scrambling down the rocks and down the side of the ridge, passing a jogger going the other way. Wait, what?

Nonplussed, we press on downwards, tired legs giving us the now familiar zombie-walk, and make our way back to the village and Nettle, one step at a time. 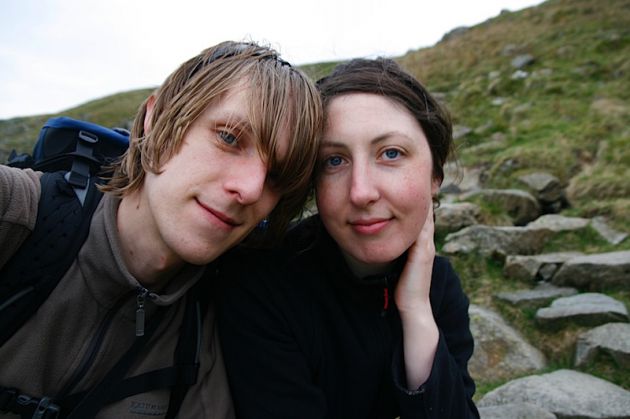 An early start (well, for us), and we drive into the little village of Ambleside, all cute slate cottages and … Continue reading

3 Responses to Hanging From Our Fingernails: Tackling Striding Edge and Helvellyn